random huh? well, in an effort to keep this journey of self exploration interesting i flew to cleveland to meet up with my old college roomie.  no, she doesn’t live in cleveland – she actually has this amazing job that allows her to live in dc, work part time in nyc and travel all over the world helping people in need.  pretty cool, right?  well, we met for a couple of reasons, but mostly to hang in a city that wasn’t home for either of us and just talk and be there for each other.  we’ve been dear friends since freshman year of college and are both doing some necessary soul searching. but let’s get back to cleveland… 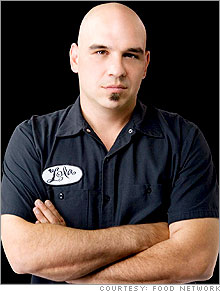 we stayed in the heart of downtown with a great view from our window of 4th street.  little did we know then how many awesome restaurants 4th street had or how often we would be there over the next 2½ days!  so, where did we start our gastronomical foray of foodiness?  well, where any honest to goodness iron chef watcher would start, michael symon’s lola.

can you say pork??  the crispy bone marrow appetizer was a foregone conclusion for our appetizer choice as we had both been turned onto this delectable treat while in paris years ago.  in fact, it may be the reason we chose lola over mr. symon’s other cleveland restaurant, lolita, which is located in the original lola spot in the treemont neighborhood of cleveland.  but back to bone marrow.  the portion was quite large (good since the price was $23) and came with various accompaniments – pickles, bread, parsley, onions, mustard.  It was fried to a nice, but somehow still light, crispness.  next were the entrèe’s, mine the pork chop (of course – symon is known to be a pig wizzard) and hers, the duck.  both were tender and cooked perfectly but i preferred mine overall as it came with a cheesy poleta to the other which came with couscous and pinenuts, she was happy though which is all that matters :).  dessert was a no-brainer (plus our waiter didn’t really give us much of a choice), the “6am special”:  brioche french toast, maple-bacon ice cream & caramelized apple.  simply… UNBELIEVABLE.  seriously, the maple-bacon ice cream was awesome.  i don’t even think they should have any other items on the dessert menu as a visit there wouldn’t be complete without tasting it.  so overall, lola was great.  it’s definitely a chef’s restaurant, with a large open kitchen and a bar that is attached where a few lucky diners can watch the kitchen brigade march along while eating their tasty creations.  mr. symon wasn’t there the night we went – i doubt he’s rarely there anymore as he’s on about 5 different television shows (this is my favorite btw) but his kitchen crew did the iron chef justice and i don’t think any fan of food can go to cleveland without stopping in – even if it’s just for dessert!

next, our lovely waiter tried to sneak us into the house of blues located next door, but we found out they were closed this particular night and ended up happily two doors down at the awesome establishment that is, the greenhouse tavern we had walked by this establishment throughout the day and kept commenting on how cool the atmosphere looked but they were closed for lunch, and as you know, lola was already planned for dinner.  so, perfect for a night cap.  the bartender was super cool and made us manhattan’s (up, of course).  he used this really cool italian vermouth that i had never heard of but was delicious.  it’s dark brown in color and starts out almost like a port but ends with a super dry finish (like vermouth).   i am adding it to our list of must have bar ingredients as it really made a go-to drink stand out.  i love when bartenders take a classic recipe and then put their own special twist on it.   it was a perfect nightcap to a great 1st day in Cleveland.